Watching this story of a romance approaching the end of the line is like searching for the right person to love. 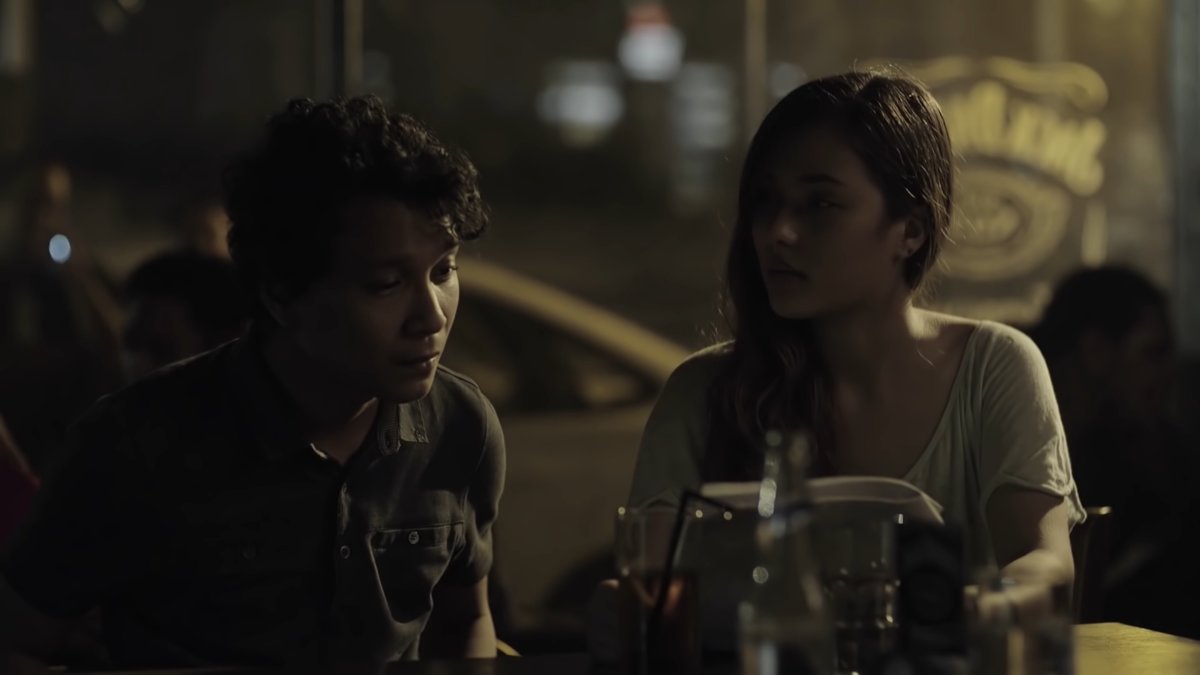 “Ang sabi mo walang hanggan, pero ‘eto tayo sa dulo.” (You said there would be no end, but here we are standing on the edge.)

If it were not for these words from the film’s original sound track, Walang Hanggan by Quest, it would have been easier to miss the purpose of Ang Kwento Nating Dalawa‘s restless settings. Throughout the film we see the characters in places of motion: sitting in a taxi or on the steps of a bridge, waiting on train platforms, walking between stations. Always in transit, Ang Kwento Nating Dalawa never lets us forget that the characters are in love, but that this love is transient. As much as they would want things to be different, the road will always come to an end, the train will always come to a stop.

The camera in this film has a similar obsession with buildings under construction: hinting at things not quite formed yet, things with perhaps no certainty of completion or fulfillment; without proper labels, like the love between Sam (Nicco Manalo) and Isa (Emmanuelle Vera).

We do not need to see the entire film to understand these metaphors for a relationship that has run its due course. They are apparent enough in the music video for Walang Hanggan that uses clips from the movie. Indeed, the resonant, heartbreaking song is responsible for much of the crowds that went to see the indie picture in its commercial release. The social media campaign for the film banked on the song’s hugot or heartbreaking ‘feels’ to draw the sawi, the romantically frustrated. People went to the theaters expecting to be brought to tears, maybe seeking legitimate comfort in a movie, or perhaps simply curious yet prepared for a good cry.

For marketing itself in this way, it is worthwhile to think of the film in explicit contrast to conventional Filipino romance movies.

It is misleading to interpret this marketing strategy to mean that Ang Kwento Nating Dalawa obeys the conventions and employs the same techniques as mainstream romances. If the viewers entered the cinema expecting easy tears, they would have likely been disappointed. The film takes a popular, accessible topic—a favorite, profitable subject, in fact, of mainstream cinema—and treats it with maturity. If the film does yield ‘feels’, it does not deliver so on a silver platter.

Consider, for example, the film’s many long takes. Several times, we find ourselves in an extended scene, watching Sam and Isa after they have reached a crucial point in their relationship. The camera dwells on the two of them, wordless, the reel quietly keeping on rolling. Some might find the extended takes pointless and dull, but others endure the discomforting situations, and understand it as an expression of the difficult intimacy of love:

The silence makes you uneasy. Squirm. You feel like peering into the lives of two private people, almost like listening in on a secret

This is not to say that this is the only way to understand those scenes, those filmmaking decisions and other cinematic choices. The lesson is that, like many good films, part of Ang Kwento Nating Dalawa‘s value and richness comes from a measure of deliberate vagueness, some quality of being undefined, that leaves space for varied meanings. Conventional films are always cut to a standard, steady pace, as if afraid to bore the audience, and in the process never leaves room for asking: what is happening here, and why?

Ang Kwento Nating Dalawa is like a relationship that gives, but also asks, from its viewers, for patience and understanding. The film gives us a glimpse of only a few central moments of a relationship that has, of course, been through many days and weeks and months, and still carries an indeterminate future. It asks us to fill in the gaps, to write, ourselves, the story between the lines, and hopefully gain an insight in the course of doing so.

One such insight is that Ang Kwento Nating Dalawa is nothing if not an earnest, realistic, perhaps much-needed, depiction of a romance on its final stages, a romance where the parties demonstrate respect and kindness, as they come to realize their circumstances. The quiet, gentle long takes are a protest against our conventional rom-coms, where the disintegration of relationships are always portrayed with much melodrama. In our mainstream movies, there is always an abundance of words, of blame and raging anger; the conflict is always on a crescendo. In Ang Kwento Nating Dalawa, our characters cry, but there is no breaking down, no scandalous lover’s quarrel in public. They keep their affairs private; they remain tentative, even reluctant. Life goes on after the tears have been shed.

These sometimes subtle deviations in the film, as compared to conventional romances, carry over to other elements.

On music: while Quest’s song is attracting moviegoers to Ang Kwento Nating Dalawa, the film itself has an almost antagonistic attitude to music. We hear it only when the characters themselves are listening to it (or making it), but even then it is always hard to hear. It is rarely heard with clarity over the noises of the streets. It is not used to drum up emotions; Ang Kwento Nating Dalawa avoids even this universal filmmaking technique. Sam and Isa, in loneliness or in an attempt to distract themselves from tugging concerns, put on their headphones searching for emotional respite—but it seems to be of little help to them, in the same way it is frustrating for us, the audience, while we try to listen in and share in their music.

Narrative and cinematography are the other elements detracting from the overall quality of the film. The story serves its purpose as the simple stage upon which the film depicts and exposes a particular phase of love. There is nothing wrong with it by itself, but the decision to end the story on an inconclusive note may be the final straw with which some of the audience will dismiss the film entirely. Regarding cinematography, the challenges of shooting the scenes in crowded public places cannot be underestimated, even more so when long takes are involved. Nevertheless, it is jarring to see dust on the lens, and it is distracting when the camera is unable to adjust to the darkness of an indoor passage as the characters walk from one outdoor location to another. Sharpness and color grading is also inconsistent (with the understanding, though, that the extensive use of shallow depth-of-field is crucial for filming in public places). Clearly, there are other local independent films, with similar premises, that are more pleasing and refined in the visual aspect.

All these elements come together and arrive at an end product that is definitely polarizing. With the weight of that hype, those who went to catch the film in its wide commercial release would have either accepted and appreciated its accomplishments, or dwelled in its disappointments. Neither of them can be faulted nor praised for their perception: in the question of whether love is something that is, sometimes, simply not meant to be, or whether it is something that can always be secured with sufficient struggle, the film stands closer to the fatalistic side. Perhaps we should resign to welcoming the film in the same way: that it is either a deeply moving experience, the kind of story that becomes part of you as time passes by; or that, after giving it a chance, you still sense that something is missing, and you just hope to eventually find something else that feels right in the time to come.

Ang Kwento Nating Dalawa was directed by Nestor Abrogena, from his own screenplay.

The featured image for this article, a still from the film, was screen-captured from YouTube.

Minor edits were made to this article on June 5, 2017, mostly to correct the statement that the OST music video is the official one for Quest’s Walang Hanggan. In February 2017, Quest released the actual official M.V., which, while equally heartbreaking, is unrelated to Ang Kwento Nating Dalawa.