Here is a well-made museum in the lowland city, about the culture of the neighboring highlands. 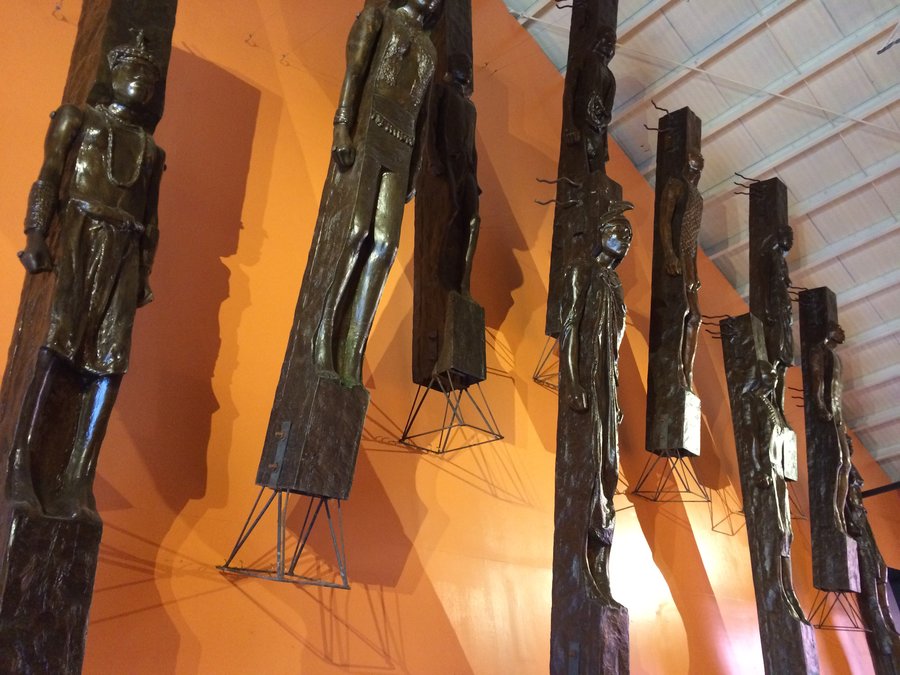 When tourists, myself included, proclaim that we ‘like’ the culture of a city or country we have just visited, I wonder what we truly intend to say. While in Vigan, for instance, do eating an egg-filled empanada, taking photos of colonial-era houses, and learning to say Naimbag nga malem!, while having fun, already count as ‘liking’ the Ilocano ‘culture’?

Unfortunately, culture extends deep beyond these superficial experiences. Travellers have time to appreciate its displayed gems, but not enough to suffer its habits. In primary school we are taught that the Ilocanos are known for being a thrifty people: do we travellers like that particular trait of Ilocano culture? Ignoring the fact that tourism is rarely a thrifty activity for the traveller, the question is irrelevant. When we tourists say we like Ilocano culture, we are only talking about Vigan’s beautiful houses, Bangui’s magnificant windmills, and Pagudpud’s fine beaches.

Perhaps as an atonement for this tourist’s guilt, I ensure that museums are always part of my opportunities to travel around the country. Museums are essential to overcoming the limitations of tours when appreciating a place’s culture; they show us the practices, products, and persistence of a culture that we cannot see by simply strolling through the streets or by buying souvenirs. This endeavor is possible because museums are built by people who have dedicated a lot of their toiling hours learning a culture beyond its most visible trappings.

The newest museum in the north

I once read that mountains are for introverts, oceans are for extroverts. Although not an outdoor person myself, if forced to choose between these extreme locations, I would clearly go for the mountains. In Luzon, it happens that the northern highlands are called the Cordilleras, and that this vast range possesses a fascinating culture (culture in the simplistic sense, at least).

Taoid is the third museum dedicated to Cordilleran culture I have seen. The other two were in Baguio—Baguio Museum and the Museum of Arts and Cultures in St. Louis University. I found Taoid by chance with a friend, one sunny day in March in Laoag City. We were initially after Museo Ilocos Norte, but it was lunchtime and that museum was closed for the hour. We saw Taoid’s glass door, and knocked, and after a few moments a bunch of youth who looked like students on a summer job opened the museum for us.

The full, official name of the venue is Taoid: A Museum of the Cordilleras in Ilocos Norte. It was inaugurated on November 17, 2015. Like the nickname of the neighboring Museo Ilocos Norte, gameng, after the Ilocano word for treasure, the name of Taoid means “a treasured heritage.” That is according to the museum’s entrance panel, which does not note the source language of the term. It is probably Cordilleran.

Now, the most remarkable feature of Taoid is its manner of presentation. It is theatrical, and, for a museum, uncommonly tactile. (For the concept of Taoid, theater director Floy Quintos is credited.)

It begins with the entrance panels, where we see a map of northern Luzon, providing geographical context to the Cordilleras. The map tells visitors about the different groups or tribes or cultures inhabiting the mountain range, and which comprise the collective culture simply and perhaps unfairly named Cordilleran. It is a significant reminder to the Filipino guest, who may have forgotten her elementary school hekasi lessons that the Cordilleras is home to more groups than just the Igorot. (There is no native Igorot group, in fact. It is a collective name only imposed upon the Cordilleran people by the Spanish.)

Reinforcing the theme of a shared heritage, a mosaic on the opposite wall of the museum lobby displays portraits of residents from various towns across Ilocos Norte, with a caption acknowledging both their present residence and their genealogical connection to Cordilleran peoples.

Then we enter the first proper gallery, a showcase of material artifacts from Cordilleran homes. In a striking display of appreciation of context, the passage to this section is flanked by bulol, the sculpted wooden guardians iconic of Cordilleran culture, and which is often kept in the home.

Gallery after gallery, Taoid engages with the same level of sensitivity. Not satisfied with keeping objects behind glass, the museum offers some artifacts for visitors’ hands-on appreciation. One could pick up wooden utensils and appreciate how these forms have been in use in the islands long before we started importing German stainless cutlery; one could pick up a pestle, use it to pound on rice grains, and feel the heft of the tool and the effort required for the activity; one could also handle a piece of Gaddang cloth, trace the quality of its tightly-woven handcrafting, and wonder at the painstaking work that would have gone into embedding the beads that characterize Gaddang weaving. The interactive aspect is impressive.

Lying at the end of a visitor’s journey into Taoid is a section devoted to contemporary art drawing upon Cordilleran culture. There are some sculptures, and drawings and installations all featuring one motif or another from the Cordilleran peoples’ rich range of styles.

It is exciting evidence that what is among the archipelago’s most iconic cultures continues to inspire creative talents, both local and international. It is a gallery that looks into the promising future of Cordilleran artistic heritage. However, while the text on the walls expresses appreciation of this renewed life for the mountain cultures, it also expresses concern about the dangers of cultural appropriation.

“We’re a culture, not a costume,” went the precise slogan of a campaign against cultural appropriation in the US. While some cultural derivations are relatively harmless, such as Ilocano inabel textiles made into modern bags, other artifacts can cause quite a shock—both for the source culture, and for the unsuspecting consumer. There is a story about a piece of elaborately-woven cloth casually used by a homeowner as covering for a dining table. To the owner’s horror, a knowing visitor recognized the textile as a burial cloth, exclusively used in the Cordilleras to wrap the dead!

With the rise in the popularity of leisurely travel (especially among us millennials), it becomes more imperative to be sensitive to cultures, and be wary of cultural (mis)appropriation. Many have written on how to go about this, centering around concepts of consent and significance, and we all should take some time to think about appropriateness before spontaneously ‘liking’ and buying pieces of culture.

Of course, ultimately, cultures are at their fullest, most realized form only when they are lived out by people: culture not just as merchandise, but as practices and points of view. Museums like Taoid offer the next best experience, a well-studied, sensitive record of cultures, masterful and engaging.