Five short films by young directors make up the second set of competition pieces in this year’s Cinemalaya festival. 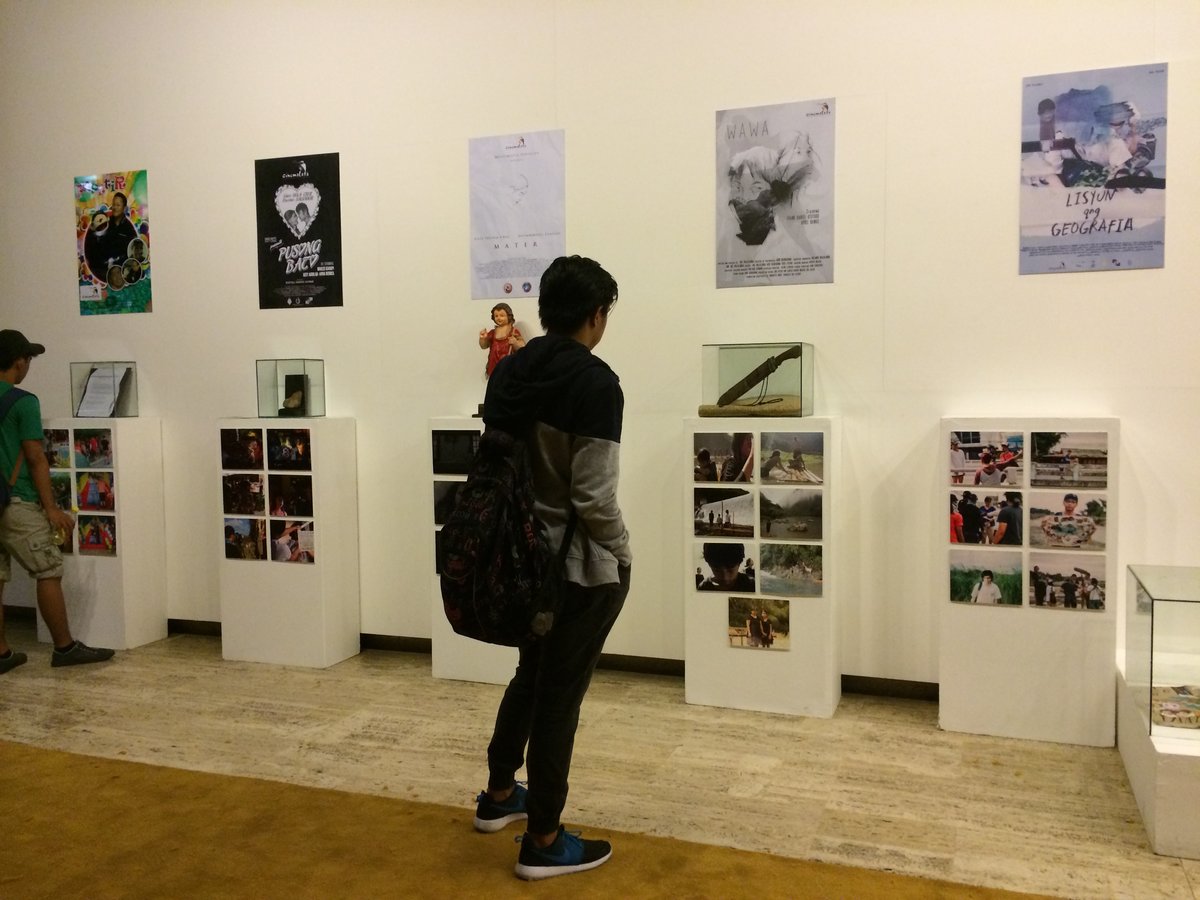 In Lisyun, Tib finds an old map as he sweeps his belongings into travel boxes, in preparation for some unmentioned journey. The handcrafted map, however, distracts from his future plans and sends him to a detour, an intimate journey to his past. This is how the viewer is introduced to the centerpiece of the film: a beautiful parallel between the geography of the outside world and the terrains of personal relationships.

Tib’s map is not a mass-printed, scientifically-accurate guide but a personal record of the landmarks of his younger years. With the quaint sheet on-hand, he retraces memories of his hometown in Pampanga: afternoons spent on a dirt road, evenings outside his old home, a twilight at a secluded corner of his high school. It is not difficult to imagine the crushing nostalgia that Tib experiences as he revisits the physical triggers of his memories. After all, memory is intertwined with location; and Lisyun shows us that identity is a function of geography.

Crucially, Tib’s map is also filled with pictures of himself and his high school best friend, Tric. We learn through flashbacks that the map was made by Tric, and the night when he gave it was the turning point of their tragic relationship. Their friendship used to be innocent, joyful, and comfortable—but it developed into a tense attraction that left them both groping uncharted territories of their personalities. Tib’s eventual reaction was denial, and rejection; and Tric, confusion and desperation.

The flashbacks end here, and we imagine how the relationship fell into neglect after that passionate confrontation at night, and in the intervening years as Tib left for university. In the present, the map leads Tib through town, and he finds some structures gone, constructions sites replacing the familiar landmarks. Places are dynamic: no matter how intimately we may come to know places at some point in our lives, they will inevitably change, sometimes subtly, sometimes violently. And they will become both familiar and unfamiliar at the same time, like an old face, or a faded relationship.

In the end, when Tib comes into the place that witnessed some of his old friendship’s happiest memories, he runs into Tric, who by appearance alone is now a changed person. After a long silence, they simply acknowledge each other’s names—and a new, unexplored path of redemption opens up. Somehow, we know that areas of Tib and Tric’s map will have to be redrawn, with brighter colors.

Despite the official synopsis (“A young boy’s journey as they take his father to his final resting place.”), Wawa is less of a journey than a single moment drawn out into several images. It describes and meditates on loss, through the poignant ritual that the son and family of the deceased go through as they cope with grief.

With no more dialogue than a recited prayer, Wawa is admittedly a difficult, amorphous film. It forces its viewers to look for meaning within the frame, though in this aspect Wawa does provide a memorable experience. There is, for example, the central, quietly moving image of the funeral rafts floating on the river among the mountains. It’s a stunning sight, and the environment is complete with fog and low-lying clouds hugging the green of the mountains. (I was genuinely delighted to know such a place is hidden in a province only next to Manila.) Complementary to this image is that of the funeral guests standing on the pebble-littered shore, in silent homage to the dead; it is a moderately frightening scene, which evokes fear and a strong sense of mystery.

Beyond the visuals, Wawa includes some scenes that offer questions, the answers to which are largely left to the audience’s imagination: how did the father die? What does the dam on the river have to do with this death? Is the son taking up the work that the father left behind? And does this expose him to the same danger and fate, completing a vicious cycle of suffering?

To answer these, I hoped to find the material that inspired the film. In the credits it is noted that Wawa is an interpretation of a work entitled like “Katawang Binalot sa Banig”; however I have not found this work, nor can I recall the exact title. I imagine that it is a poem, to be experienced and understood in the same way as this short film: visually and quietly.

The core idea of Mater, that devotion is akin to substance addiction, is at least as old as communism and Karl Marx: the economist once famously stated that religion is the opiate of the masses. A related, gentler idea has been explored in a previous Cinemalayà entry, 2013’s Debosyon, in which religious fervor is likened to romantic enchantment, and was delightfully set in the specific context of the Bicolano devotion to Ina (Our Lady of Peñafrancia).

Regardless, the execution of Mater is commendable. One well-used element is sound. The mother and daughter characters do not exchange a single word for the duration of the film; the only words the mother utters are muffled prayers, or the endearing but unsettling chatter directed at the Sto. Niño statue she washes every day (and which she treats like a dear child, a terrible irony when contrasted with her relationship with her living daughter.)

This lack of dialogue heightens the tension of the family’s tortuous existence. The emotional distance between the characters is a gaping chasm, reflected in the way the daughter watches her mother from a distant window; or in the insufficiency of walls and music in separating the mother’s piety and the daughter’s torment; or in the duel of pride at the table, when the mother insists on prayer and the daughter rebels against manner.

The film builds up to its psychedelic climax, in a sequence accompanied by high-intensity sound design. It rages on with fear and paranoia up until the final, slow release of anguish manifested as a haunting scream. And then silence—Mater closes, as it starts, with stillness.

It is important to note that the film hints, very subtly, at a third persona that is likely a dominant force in the family’s life. Without this complication the film can stand on its own, as it does, but the idea provides an excellent opportunity for imaginative viewers to draw further meaning from the story, and adds a further dimension to what appears to be a simple tale.

It is easy to imagine that the idea for Pusong bato started as a joke, a mockery that evolved from that darned song the film shares its name with. Regardless of how it was conceived though, the film basks in its playfulness and risks a lot through some truly silly scenes.

Cinta Dela Cruz, a “middle-aged faded actress”, clings on to her past by watching her old films at home everyday, in the process shutting out the world. When a powerful earthquake strikes, her life is rattled and takes a turn for the bizarre. She falls in love with a curious object. She responds—with lust, disgust, confusion, then determination—and the tale ends in comic-tragic resolution.

The heart of Pusong bato is a choice between two attitudes. One is about realities, of real circumstances, real people, and real expectations. The other is about passion and illusion, not deliberate ones, but of the misguided kind.

The dichotomy is presented further in the contrast between the film’s ‘reality’ scenes and those of the film-within-the-film. The latter, it should be noted, is the greatest pleasure of Pusong bato: colorful faux-vintage scenes portraying a decidedly cheesy romance. I see it—and hereby the spirit of Cinta possesses me—as a heartwarming homage to a past generation of movies, to a so-called golden age of Philippine cinema.

To herald the bad news before the good ones, Papetir, unfortunately, suffers from rough editing. It is unclear what the goal is: should the film feel like home video, or is it aiming for a jittery look, in which it fails by being overdone? Based on the script, there was an intention to capture the unscripted laughter of children in a party. Maybe this distracted the crew.

Nevertheless, Papetir is a great concept that is not wasted. In this very short film, a ventriloquist performing at a children’s pool party finds himself in a dialogue with his past, through his own puppet which takes on a dead child’s persona. The puppet/child blames the puppeteer for its/his death, which is revealed to have been caused by drowning at a pool not unlike the one at the party. An intense confrontation develops, and there are genuinely unsettling moments, provided by the contrast between the ventriloquist’s internal conflict and the children-audience’s clueless enjoyment of what they merely see as a well-played performance.

The keystone of the film’s concept is the uncertainty—was the puppet actually possessed by the child’s spirit, rendering the story a supernatural one, or was it the puppeteer breaking down, letting go, and was the resulting conflict with his puppet simply an externally manifested internal dialogue? Somehow, it does not matter: possessed or not, the puppet is a fully convincing, anguished character, and the paradox of it being attached to the puppeteer whom it blames for the tragedy is a brilliant metaphor for the regretful relationship between the two. That it all takes place in a children’s party makes the pain of lost, furious innocence starker.

We are all familiar with the idea that, maybe, behind the painted smiles of clowns are lonely persons. Now, we have a new character—that maybe, behind the cheery performances of puppeteers are tragedies, both internalized and unresolved.